WHAT'S NEXT IS MORE THAN A BRAND, IT'S A MINDSET.

As one of the world’s largest independent global communications and creative agencies, Ruder Finn has defined and redefined PR for more than 70 years, shaping communications that move industry-defining brands, companies and leaders from what’s now to what’s next.

Our clients share the same mindset. From developing breakthrough science and transformative technologies to building authentic bridges across diverse communities, their visions are laser focused on making change for the better.

The same can be said for our people. We are a global team of curious and independent future-thinkers, working every day to spark ideas, push boundaries and be a force for good on behalf of our clients.

Together we partner to redefine leadership, reimagine the marketplace, and rethink customer experiences around a shared sense of purpose.

At Ruder Finn, we are committed to fostering an open and inclusive environment that encourages growth, respect and independent thinking for our employees. We celebrate diversity and believe creativity thrives in an environment where every voice is heard. As an Equal Opportunity Employer we prohibit any form of discrimination or harassment of any kind. Diversity, equity and inclusion are integral to our values and key to nourishing our what's next culture. 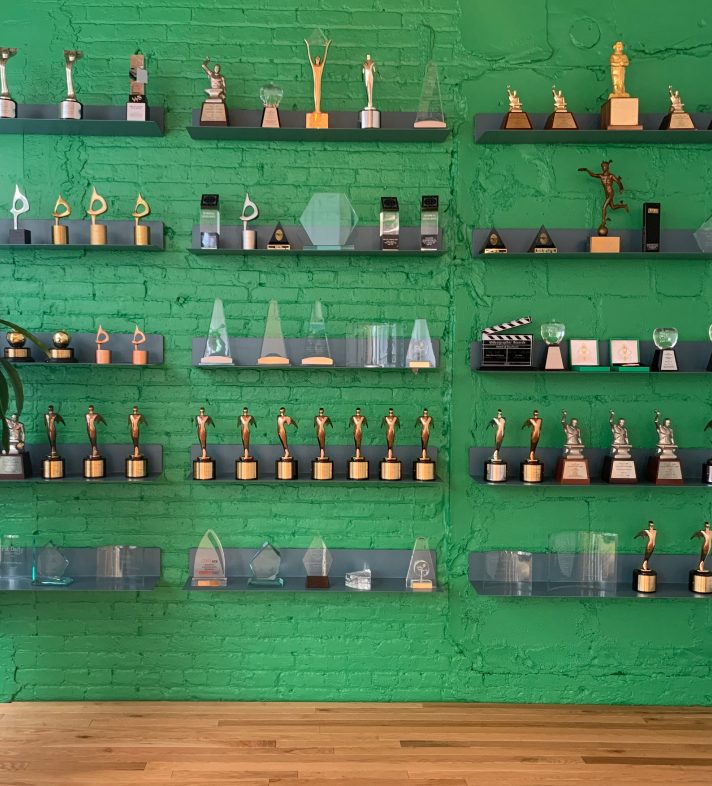 A Legacy of Pioneering

David Finn (1921 - 2021) was a founding father of public relations and renowned photographer whose early influence in shaping the communications landscape ultimately helped lay the groundwork for authentic leadership, stakeholder capitalism and support for the arts by industry, cementing the role of Communications in the C-suite and elevating Ruder Finn’s position as a global communications leader.

1948 Ruder Finn is Founded David Finn and Bill Ruder found Ruder Finn (known as Ruder & Finn), one of the first PR agencies, in the linen closet at the Lombardy hotel.
1960 Early Work  President Kennedy hires the firm to rally public support for the 1960 nuclear test ban treaty.
1962 Seeing through a new lens  After purchasing his first camera at age 40, David begins his photography career, embarking on what he calls “the wonderful adventure of seeing”. He went on to publish over 100 photography books.
1969 The Corporate Oligarch David Finn writes The Corporate Oligarch, which ultimately lay the foundation for stakeholder capitalism, portraying corporations as the “central institution in American life”.
1979 The Pritzker Architecture Prize  David Finn and Bill Ruder work with Jay Pritzker to create the prestigious “Pritzker Architecture Prize”, which would live on to become the most coveted award in the field.
1984 Work with Henry Moore David Finn works with the world-famous sculptor Henry Moore, to bring 25 sculptures to New York City, in an exhibition sponsored by art collector George Ablah.
1985 Glad Bag-A-Thon Ruder Finn executes the “Glad Bag-A-Thon,” the nation’s largest organized clean-up and recycling initiative largely predating other corporate social responsibility and sustainability initiatives, in partnership with Glad Bags and Keep America Beautiful.
1987 Committing to the Arts David Finn counsels the curation of the PepsiCo Donald M. Kendall outdoor sculpture garden, housing a remarkable collection of works by major twentieth-century artists that further emphasizes Finn’s unique ability to bring art to the public.
1989 A New Chapter for Ruder Finn David Finn’s daughter, Kathy Bloomgarden, pushes Ruder Finn to new frontiers - launching the firm’s China office and Healthcare practice, kicking off a new chapter for the agency.
1992 Academy of the Arts & Sciences  David Finn becomes a member of the Academy of Arts & Sciences.
1994 Sculpture at the White House David Finn works with Bill and Hillary Clinton to bring 20th-century sculpture to the Jacqueline Kennedy Garden at The White House.
1995 National Council on the Humanities  President Bill Clinton names David to the National Council on the Humanities, the advisory committee to the National Endowment for the Humanities (NEH).
1996 RFI Studios Ruder Finn becomes the first major PR agency to launch a digital shop, Ruder Finn Interactive (RFI Studios).
1999 Work with the UN David Finn begins working closely with the United Nations and Secretary-General Kofi Annan, with whom he would collaborate for over a decade.
2001 Lamentation: 9/11 David photographs Ground Zero following the tragic World Trade Center attack. E.L Doctorow and David write the book Lamentation: 9/11 to document the historical moment.
2003 Breakthroughs with Novartis Ruder Finn helps Novartis launch the global introduction to a newly FDA-approved Gleevec — the first targeted therapy breakthrough on the road to a cure for cancer.
2011 Citi’s 200th Anniversary  To commemorate Citi’s 200th anniversary, Ruder Finn creates a multi-channel global campaign which is recognized in PRWeek’s 15th-anniversary edition as one of the 15 most innovative campaigns.
2014 Kathy Bloomgarden becomes CEO Ruder Finn undergoes restructuring, and Kathy Bloomgarden assumes the role of sole Chairman and CEO of the Ruder Finn Group, with David Finn as Chairman Emeritus. Ruder Finn continues to build momentum in building a global leadership position.
2015 PRWeek Hall of Fame  David Finn is inducted into PRWeek’s Hall of Fame in recognition of his outstanding contribution to the development of the communications industry and the establishment of the PR profession.
2016 David Finn’s Photography  David Finn donates his extensive photo archive to the National Gallery of Art, Washington D.C.
2018-Present What’s Next The agency continues the expansion of its tech, innovation and digital practices under Bloomgarden’s leadership, taking clients from now to what’s next, with new communication tools, and adding RF Experience, RF TechLab, RF Relate, RLA, Osmosis Films, jacobstahl, Mantis PR, Peppercomm and Comunicad PR to its arsenal.